Though the bitter herbs of the Bible are not specified, the term likely refers to chicory, endive, coriander seeds, horehound, sow-thistle, and wild lettuce.

Herbs in the Bible

Herbs, plants, and spices are mentioned throughout the Bible. Examples include hyssop, lavender, and rosemary. As for the bitter herbs of the Bible, there are three references in the Old Testament: Exodus 12:8, Numbers 9:11, and Lamentations 3:15.

Signifying the start of Passover, the Passover Seder retells the story of Exodus and answers the question, "Why is this night different from all other nights?" For the dinner, six foods are placed on the Passover Seder Plate, each symbolizing an important part of the Exodus story:

As for the Maror or bitter herbs, they serve as a reminder of the embittered slavery experienced by Jews in Ancient Egypt: "The fourteenth day of the second month at even they shall keep it, and eat it with unleavened bread and bitter herbs." (Numbers 9:11) The most common bitter herbs used today are lettuce and horseradish.

The Bitter Herbs of the Bible

Chicory, coriander, dandelion, sow-thistle, and wild lettuce were likely some of the original bitter herbs, given their availability in the Sinai Peninsula and Egypt. Other plants recognized as "bitter herbs" however, include mint, sorrel, horehound, wormwood, and watercress.

The following herbs qualify as bitter herbs, though not all of them are "original." 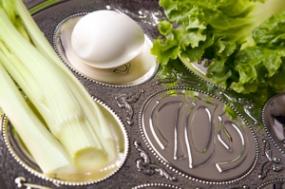 Finally, there's wild lettuce (Lactuca sativa), which dates back to Ancient Egypt and was most certainly one of the original bitter herbs of the Bible.

For Passover, lettuce typically occupies the Chazeret place on a Passover Seder Plate. It remains the bitter of choice for Jewish people in Egypt and Arabia.

As said, everything concerning Passover relates to symbolism and the use of Romaine lettuce is no exception. This particular lettuce isn't bitter to taste at first; in fact, it's sweet and fresh. However, the longer Romaine lettuce is left in the ground, the more bitter its flavor becomes. This makes it a perfect Passover Seder bitter herb, as it symbolizes how life for the Israelites became increasingly bitter under Egypt.