The blessed herbs Essiac tea blend is a special formula developed by nurse Rene Caisse in the early 20th century. Caisse, a Canadian nurse, met a woman who claimed a blend of eight herbs called blessed herbs cured her breast cancer. Before rushing out to make or buy this formula to cure or prevent cancer, please be aware of several things. First, neither the tea nor the herbs have been researched by the Food and Drug Administration (FDA) and so any claims made about this tea curing disease must be taken as folklore not fact. If you choose to use this tea, you do so at your own risk, and should consult your doctor about it. You should never stop taking any medications or stop a course of treatment unless advised by your healthcare provider.

Keeping these warnings in mind, the story of blessed herbs Essiac tea blend is intriguing. Rene Caisse was a Canadian hospital nurse who met a patient in 1922 who claimed she had cured her breast cancer by drinking a special tea. The formula for the herbal tea was given to the patient by an Ottawan Indian medicine man. Caisse named the tea "Essiac" which is simply her last name spelled backwards.

Caisse was so impressed by the woman's testimony and by the experiences of her patients trying the tea that she quit nursing professionally and began brewing up and distributing the tea from her home. Several times the authorities tried to arrest her for practicing medicine without a license, but because she was not charging anyone for her advice or for the tea, she was allowed to continue what she was doing.

The original formula for the tea actually yielded a success rate of only 10 to 20 percent. To put that into perspective, the Skeptic's Dictionary cites a placebo effect in a controlled experiment at around 35 percent. The placebo effect is when the patient believes a substance to be healing when in fact it is inert; it's the same thing as giving someone a "sugar pill" to cure them and telling them it is medicine. Their belief in the medicinal powers of the healer or the pill triggers a healing response that science cannot explain.

Caisse consulted with a master herbalist named Elmer Grove who eventually created the final formula for the tea. With the help of several physicians interested in the formula, experiments began using the herbs as both tea and as an injection.

Caisse refused to divulge the exact formula to anyone, although she did cite four herbs as the major ingredients. In 1959, she worked with a physician, Dr. Charles Brusch, on the formula so that it could be passed on to others after her death.

You can purchase Essiac tea blends at health food stores nationwide, complete with Rene Caisse's picture on the box. The herbs used to make Essiac tea are often sold in bulk. Don't let the high price tag fool you - once you purchase the herbs in bulk, they brew a tremendous amount of Essiac tea; enough to keep you sipping for a while. 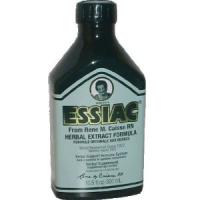 Make Your Own: The Ingredients

Many herbalists, however, believe that prepared teas pale in comparison to the original blend Caisse developed in her home. In an article in Mindful Living, author Gina Darby states that the tea's strength comes from using the right herbs prepared in just the right way.The basic Essiac tea ingredients includes medicinal herbs such as:

The choice is yours whether or not you use this or any other herbs for health. Pregnant and nursing women or people with chronic medical conditions should not use this or any other herbal treatment without the recommendation of their doctor. If you take prescription medication, it's wise to talk to an experienced herbalist and your medical doctor about potential interactions between this herbal blend and any medicines you're taking.

Essiac tea blends many useful cleansing herbs, but whether or not it can cure or prevent cancer remains to be seen.