Chamomile tea is the most popular herbal tea in the world. Most people know about the purported benefits of herbal medicine, having heard these plants can help treat nearly every human ailment. While there has been an increase in the interest in natural health in recent years, leading more people to try different types of herbal teas as self-medication, more people reach for chamomile than any other kind of herb. This is largely because chamomile tea has a reputation as being safe and effective. It also has a definite feeling of comfort attached to its name. After all, generations of children people grew up hearing the story of Peter Rabbit and how his mother gave him chamomile tea to help him feel better. It doesn't get much more comforting than that!

Use in Human History

Chamomile has a long history of use in human culture, dating back at least as far as the ancient Egyptians, and probably even farther back than that. The Egyptians used it to combat the signs of aging, and considered it so valuable they offered it as tribute to their gods. The ancient Greeks viewed chamomile as a cure for many ailments, including colic, sunstroke, and fever. It has long been used in European herbal medicine, especially among the peasants and rural families. In Germany, it has a reputation of a cure-all, and it has a prominent place in old English herbal books.

Its most common modern use is as a cure for insomnia, a use that goes back to the 1600s. Its preparation hasn't been limited to just tea, either. Over the centuries, people have found chamomile to be helpful as an ingredient in lotions, ointments, oils, inhalants, and extracts. Even today, its reputation as a powerful natural medicine is still going strong, with many hospitals in Europe using it to help keep their patients relaxed and calm.

The Health Benefits of Chamomile 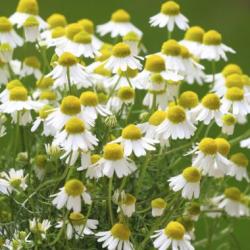 Probably the best-known benefit of chamomile tea is its relaxation properties. Chamomile is full of tryptophan, also found in turkey; it is a powerful sleep aid. Its relaxing properties promote sound sleep and a calm mind. Many people who are chronic worriers use chamomile to ease their troubled thoughts. Because it's a natural stress reliever, people with nervous disorders frequently report feeling much less frazzled when they drink chamomile tea on a regular basis.

Chamomile has potent anti-inflammatory properties. Those with inflammatory conditions, such as rheumatoid arthritis, psoriasis, interstitial cystitis, and asthma often find mild to moderate relief from their symptoms when they use chamomile. While chamomile is no substitute for prescribed medication, it can add a little extra symptom relief and improve a person's feelings of well-being.

Chamomile eases muscle contractions throughout the body (except in the uterus, where it can promote them). This makes it an effective remedy for stomach and intestinal cramps, hiccups, and menstrual cramps. In fact, the use of chamomile to settle an upset stomach is second only to its use as a relaxant.

In addition to being a wonderful and gentle natural medicine, chamomile can enhance your appearance. Used as a hair rinse or mixed with henna, it can bring out natural golden highlights in dark hair and brighten naturally blond hair. Because it has anti-inflammatory properties, chamomile makes an excellent remedy for acne, rosacea, and hives. The penetrating oil can be mixed with carrier oil like olive or walnut to moisturize very dry skin.

Chamomile is a member of the ragweed family, so anyone who is allergic to ragweed should avoid it unless given the go-ahead from an allergist. Because chamomile has blood-thinning properties, people on blood thinners like Coumadin and Warafin should not use it. In addition, chamomile can stimulate uterine contractions, making it something pregnant women should avoid for the duration of their pregnancies.

How to Make Chamomile Tea

Take two to three teaspoons of dried chamomile flowers per cup of tea you intend to make. If you have tea bags, just use one bag per cup. Put the flowers or tea bag into a cup and bring eight ounces of water to a boil. Pour the boiling water over the chamomile in the cup and allow it to steep for at least three minutes (longer if you want a stronger tea). Remove the tea bag or strain out the flowers by pouring the tea through a sieve into another cup. Sweeten as desired with honey or sugar and allow to cool. You can drink as many as three to four cups of chamomile tea a day.