While you may think of it as just a tasty addition to French toast or rice pudding, the health benefits of cinnamon are numerous. There are many types of cinnamon, but the health studies conducted typically use Cassia, the type normally found in grocery stores.

In China, cinnamon has been used for hundreds of years. It is believed to improve vitality, boost energy and increase circulation. It was often given to people who had cold feet, and it is an important ingredient in chai, helping with the digestion of fruits and dairy products.

Other traditional uses for cinnamon include the following:

It is a common ingredient in many cultures and health philosophies including ayurveda. Practitioners of Ayurvedic medicine often recommend it for the kapha type.

While cinnamon has been used as a traditional remedy in other cultures for years, there are also some newer uses coming to the forefront with current research. These include everything from fighting bacteria to reducing cholesterol.

New research into the health properties of cinnamon provides hope for diabetics. Researchers at the United States Department of Agriculture conducted a study on the benefits of cinnamon using the pill form of the spice in various doses. Four groups received either a placebo or varying amounts of cinnamon. Their blood glucose levels were monitored. The net result was that cinnamon appeared to lower blood glucose levels regardless of the dose, so a little went a long way. Other studies also point to cinnamon as a promising agent to reduce blood glucose levels. This is very important for people who may be diagnosed with Adult Onset or Type II diabetes or insulin resistance, a warning sign of impending diabetes. Cinnamon taken with meals, a healthy diet low in sugar and moderate exercise may prevent development of full blown diabetes or delay its onset for many years.

Cinnamon may also pack a powerful punch against microbes. Research at Kansas State University demonstrated that cinnamon fights E.coli bacteria. The study examined cinnamon used in unpasteurized apple juice. When used alone or in combination with typical food preservatives, cinnamon knocked the amount of E.coli bacteria in the apple juice to almost undetectable levels. In another study conducted in Taiwan, the People's Republic of China, demonstrated similar effects against other strains of bacteria. 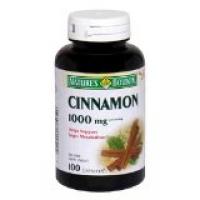 Other Health Benefits of Cinnamon

These studies are not the only ones. Researchers are finding new benefits of cinnamon every day. For example, recently animal studies have shown cinnamon to be active against Candida albicans (a fungus that causes yeast infections) and Helicobacter pylori (the bacteria that causes stomach ulcers). Cinnamon is also known for the following actions:

Sprinkling some cinnamon on your toast or eating a cinnamon roll is not going to affect the medication you may be taking. However, if you decide to use therapeutic doses of cinnamon, you should discuss your plans with your health care provider. This is especially true if you take any of the following medications or have the conditions listed:

Cinnamon is also a beneficial essential oil. As such, it is used for the following conditions:

It is important that cinnamon oils not be taken internally because ingestion of these concentrated oils can be fatal.

Add Some Spice to Your Diet

The health benefits of cinnamon are varied. Adding a sprinkle of cinnamon to your morning oatmeal, drinking a cup of chai or stirring some into the cookies you bake are all great ways to add this beneficial spice to your diet. Always consult your doctor or health care provider before using cinnamon in therapeutic doses the researchers used. Being healthy never tasted so sweet.