Over the millennia, people have sought out certain spices, not only for culinary purposes but for medicinal uses as well. Whether you're cooking with them or working on homemade remedies, these are spices that are definitely helpful to have on hand.

Keep this spice shopping list handy to create a well-stocked spice cabinet. Simply click the image below and it will open as a PDF document that you can save and print. If you need help downloading the printable list, check out these helpful tips. 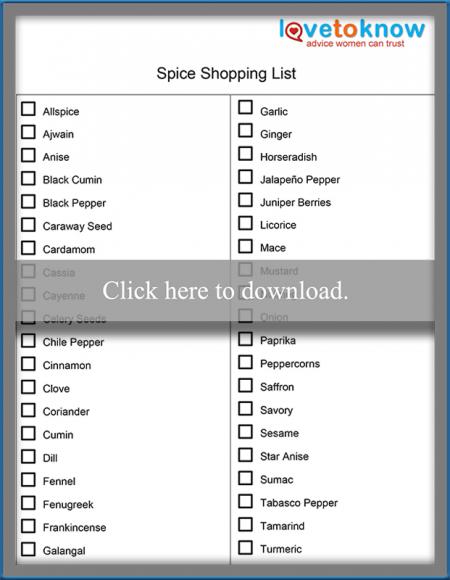 Each of the spices on this list has its own distinct flavor and uses.

Allspice is a berry that has combined flavors of pepper, nutmeg, and cinnamon. Add it to stews, soups, and desserts for depth of flavor.

Ajwain is a seed similar to caraway in texture. Use it in baked goods for depth of flavor.

Anise has a flavor similar to licorice. Use it with honey to make tasty baked goods.

Sprinkle black cumin seeds on a salad or combine them with lemon for a savory sauce.

Black pepper is a berry that has a distinctive spicy taste. Add it to nearly any savory meal for some subtle heat.

Caraway seeds have a slightly sweet flavor and are used in rye breads.

Cardamom has a spicy-sweet taste that works well with cinnamon and honey. Use only a little bit for a lot of flavor.

Cassia is frequently sold as a type of cinnamon, but is actually a member of the pea family. Use it like you would traditional cinnamon.

Cayenne is a spicy red pepper related to hot peppers like jalapenos. Use it to add some kick to your meals.

Celery seeds are actually a member of the parsley family. Use them in soups and stews to add a subtle hint of celery flavor.

There are actually numerous varieties of chili pepper. Always read the label to determine what type is going into your food. Most have varying degrees of spiciness.

True cinnamon is softer and sweeter than the Cassia variety. Use it in baked goods or beverages, or for your health.

Cloves and sweet with a distinctive smell. Add them to baked goods or to savory meats you wish to sweeten.

The spice coriander is the seed portion of the Coriander plant, from which Cilantro is derived. It has a citrus-like flavor and tang.

Cumin is a seed with a bitter taste that is an integral part to most Middle Eastern cuisines.

Dill is a tangy herb that can be added fresh to salads or dried to stews and soups.

Fennel has a licorice taste similar to anise.

Fenugreek has the surprising taste of maple syrup. Use it in curry to add some sweetness to the meal.

Frankincense is a sweet gum. Use it when making breads from rice as a flavorful binder.

Galangal is a root that has a taste reminiscent of both pine and citrus.

Garlic is a bulb that can add a lot of flavor and potency to any meal.

Ginger is a root that has a spicy flavor to it. Use it in stir-fries or add it to sweet dishes for a little kick.

Horseradish is a bitter, spicy root. Submerge it immediately after grating in vinegar to keep it from getting too bitter.

Jalapeno peppers are a type of hot chili pepper. Use them fresh or dried to add heat and spice to any meal.

Juniper berries have a pine-like flavor and are used to flavor gin.

Licorice is a root that gives foods a particular flavor. Use it in both sweet and savory foods.

Mace is the outer covering of the Nutmeg seed. It has a similar flavor to Nutmeg, but is more subtle and less intense.

Mustard comes from a seed that is most often ground into a paste. It has a spicy bite in flavor.

Nutmeg is a seed commonly used with cinnamon in baked goods, but it also offers other benefits.

Onions are bulb vegetables that can be sweet or spicy depending on variety.

Paprika is a type of pepper. It ranges from mild and sweet to spicy in flavor.

Peppercorns are the berries that black, green, and pink pepper are derived from.

Saffron is a flower. It has a bright yellow color and a distinctive taste; try it on rice and other bland starches.

Savory is an herb similar to mint. It has a more delicate flavor, so more can be used.

Sesame is a seed that has a nutty taste. Use it to create your own tahini.

Star Anise is a small seed that comes from a star shaped pod of an evergreen tree. It has a subtle, licorice flavor.

Sumac is a berry with a tart flavor. Add it to savory dishes to deepen the flavor.

Tabasco is a type of hot chili pepper most commonly made into hot sauce.

Tamarind is the seed from an evergreen tree. It has a sweet and sour flavor that works well in sauces.

Turmeric is a root with a slightly bitter, spicy flavor. Use it as a less expensive substitute for saffron in recipes.

Cooking with spices or using them for medicinal purposes can take some getting used to, but it's fun to experiment. With the vast number of spices available today, you're sure to find some that will complement your cooking tastes, your medicinal needs, and your lifestyle.