Though they are known for their fresh, sweet fragrances, chamomile, mint, and dandelion each have a place on a list of bitter herbs. Indeed, a "bitter herb" is essentially any herb that possesses a bitter taste. Historically, people have used this group of plants for ceremony, healing, and cooking. Ranging from mild to strong, these herbs can be as light as chamomile or as biting as rue.

For centuries, people have used Angelica (Angelica archangelica) to remedy colds and ailments such as rheumatism. Its properties make it a stimulant, stomachic, and tonic. For liquors, it's been used to flavor gin.

Chamomile's (Matricaria chamomilla) curative properties include relief of both fever and restlessness. This mild bitter herb is used as a sedative and antispasmodic.

Dandelion (Taraxacum) is a mild bitter herb used as a blood cleanser and diuretic, which is also said to lower cholesterol and blood pressure. It is still used in traditional cooking in the Mediterranean and parts of Asia.

Goldenseal (Hydrastis Canadensis) is a strong bitter herb used to stimulate the appetite and eliminate infections. In Collections for an Essay Toward a Materia Medica of the United States (1804), Professor Benjamin Smith Barton declared goldenseal a tonic, observing, "The root of the plant is a very powerful bitter."

Horehound (Marrubium vulgare) dates back to Ancient Egypt and is believed to be one of the bitter herbs mentioned in the Bible. It has been used as a treatment for colds and respiratory ailments (such as in cough syrup and throat lozenges). 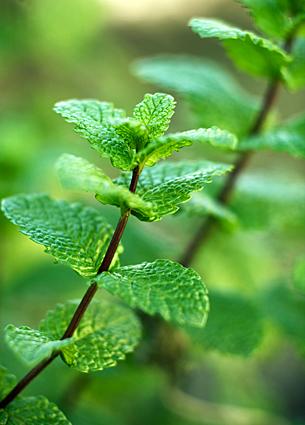 Milk Thistle (Silybum marianum), which is also known as "sow-thistle," is also used for healing. It's known as a powerful liver detoxifier, as well as an antidote for Amanita-mushroom poisoning.

Peppermint (Mentha piperita) is a flavor, a fragrance, and medicine. Roman naturalist Pliny the Elder wrote of peppermint, "The very smell of it alone recovers and refreshes the spirit." Peppermint oil may allay nausea and stomach aches, and peppermint has been called "the world's oldest medicine."

Rue (Ruta) is a strong bitter herb used as an antispasmodic, a sedative, and a mild stomachic. It is mentioned in the Bible as "peganon" and in William Shakespeare's Richard III -- "Here is this place/I'll set a bank of rue, sour herb of grace."

Wormwood (Artemisia absinthium) is a perennial plant used as an antiseptic, tonic, diuretic and stomachic. The herb's strong bitter taste is still used in wines and spirits such as vermouth.

Yarrow (Achilles millefolium) is a flowering plant that produces a mild bitter herb used as an astringent and cold remedy. The entire herb can be used.

Bitter Herbs of the Bible

A list of bitter herbs mentioned in the Bible will be quite different from the above and focused instead on the original bitter herbs likely used by the Hebrews during Passover. Among them are the following:

For the Passover Seder ceremony, bitter herbs symbolize the embittered slavery experienced by Jews in Ancient Egypt. The herbs ensure that this history is never forgotten, that it is taught each and every Passover. The bitter herbs commonly used today are horseradish and (Romaine) lettuce.

Whether your interest in bitter herbs is medicinal, religious, or culinary, remember that all herbs should be used properly to obtain the best results. Before you decide to use an alternative medicine approach such as herbal treatments and remedies, it's wise to consult with your healthcare professional as some herbs can interact with prescription medicines or be toxic if used improperly. While bitters herbs may not be as tasty as other herbs and spices, their beneficial properties make them worth the slight inconvenience of an unpleasant taste.