There are a number of medicinal uses of oregano (Origanum vulgare) that may surprise you. A powerful anti-bacterial and anti-fungal agent, oregano also has anti-inflammatory, antioxidant, and anti-parasitic properties. It's typically taken as a supplement or used as an essential oil.

Exploring the Medicinal Uses of Oregano

Oregano contains thymol and rosmarinic acid that work on the body to minimize the destructive effects of free radicals. According to researchers at the USDA's Beltsville Agricultural Research Center in Maryland, a tablespoon of fresh oregano contains as much antioxidant power as a medium sized apple.There is a lot of current medical interest in the ability of antioxidants to help repair damage to the body on a cellular level and combat cancer, heart disease, high blood pressure, macular degeneration and help slow geriatric muscle deterioration.

Historically used as a food preservative, oregano has some impressive credentials as an anti-fungal. Fungal infections can be nasty customers and even fatal in some circumstances. Oregano has been used as both an internal and external preparation in treating fungal infections and has been tested successfully in inhibiting the growth of yeasts like Candida albicans.

Oregano might just be the little herb that can. A phenol in oregano, carvacrol is generating interest for its powerful ability to kill bacteria. Preliminary tests conducted at Georgetown University suggest that oregano's antibacterial muscle may rival that of streptomycin and penicillin.

Other Medicinal Uses of Oregano

If you plan on keeping oregano in your medicine cabinet, there are some other uses for this herb that you should know about. Oregano can be used as a digestive aid because it encourages salivation. It can soothe bee stings and treat venomous spider and snakebites. Oregano is also an efficient pain reliever.

Although herbs and spices may appear benign because they are used in cooking, concentrated doses can lead to problems. Oregano has many medicinal applications that can help you get and stay well, but consult your doctor before making any changes or additions to the medications you are taking. Oregano can cause skin irritations in some people, and should be avoided if you are pregnant or nursing. 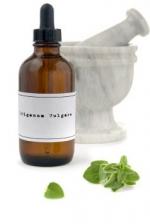 To derive the maximum benefit from supplements, use them within the first six months of purchase or less. Store supplements in a cool, dark place, and keep them away from moisture.