Turmeric has been used throughout history to treat diseases from arthritis to vaginitis. Curcumin, the active ingredient in turmeric, has numerous health benefits that may apply to certain health conditions.

Curcumin is an anti-inflammatory; it decreases inflammation. This allows a reduction in swelling and improves joint flexibility.

Curcumin works on osteoarthritis by slowing or preventing cartilage damage. It protects chondrocytes (a form of bone cell) and reduces the activity of osteoclasts, the cells that absorb bone tissue. The antioxidant action of curcumin prevents or lessens damage to the cells and DNA.

One of the most important benefits of curcumin is that it reduces and eliminates inflammation, whether systemic (system-wide), or localized (in a single location). Medical experts believe inflammation is the root cause of most diseases, including arthritis. It causes the swelling, stiffness, and pain in arthritis of all types.

Non-steroidal anti-inflammatory drugs (NSAIDs) relieve pain, but curcumin has been found to work better for reducing inflammation and swelling that cause pain in people with arthritis. This may be due to the anti-inflammatory action of the curcumin.

Curcumin plays a part in modulating the immune system, and rheumatoid arthritis is an autoimmune disease caused by a malfunctioning immune system. A paper in the Journal of Clinical Immunology states curcumin, "can modulate the activation of T cells, B cells, macrophages, neutrophils, natural killer cells, and dendritic cells." These are all cells associated with your body's immune responses.

Curcumin is beneficial for a number of neurological issues, such as Alzheimers, dementia, epilepsy, depression, and neurodegeneration.

Curcumin prevents oxidative damage and inflammation with fewer side effects and toxicity than common NSAID's. According to the NIH, curcumin suppresses inflammatory response to the deposition of amyloid plaques in Alzheimers patients. Amyloid plaques are bunches of sticky proteins that build up between the nerve cells which prevent cell to cell signalling. Antioxidants in curcumin also protect brain cells from free radical damage, helping to maintain the integrity of the cells.

Curcumin is showing results for improvement in both atypical depression (AD) and major depressive disorder (MDD). A study in the Journal of Psychopharmacology indicates curcumin supplements can "reverse the development of depression..." for MDD. Likewise, anti-inflammatory actions in curcumin are found to reduce the high level of inflammation associated with AD.

Curcumin studies show it restores Brain-Derived Neurotrophic Factor (BDNF) levels. BDNF is a brain chemical that is important in creating new brain cells and preventing the death of old brain cells. It plays a part in neuroplasticity, which is the brain's ability to rewire itself with new neural pathways. By increasing BDNF, curcumin prevents the brain from deteriorating.

According to the site Examine.com's Curcumin Fact Sheet, a supplement level of 80 to 500 mg is required for systemic purposes (affecting the whole body). Supplements can be either capsules or the powdered spice. Include quercitin, coconut oil, or black pepper when you supplement to increase bio-availability of curcumin. Bio-availability is the fraction of the dose that reaches the circulation. Curcumin has low bio-availability, so it needs to be taken with another item to increase absorption. 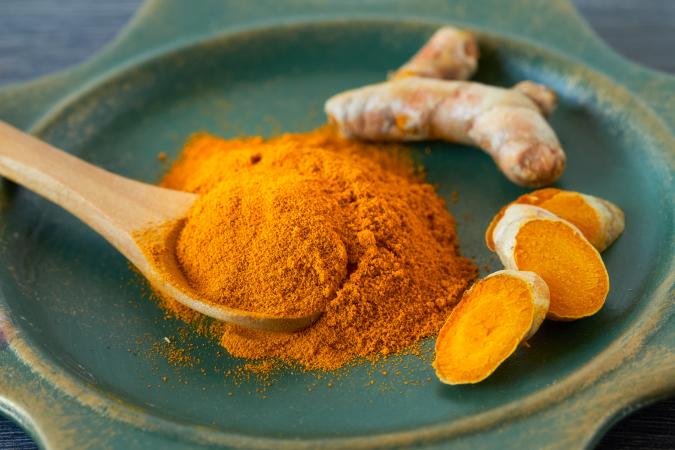 Antioxidant and anti-inflammatory actions are two of the ways curcumin helps to prevent cancer. How does it work?

Curcumin activates cell death pathways, as well as inhibiting growth and proliferation pathways. In other words, curcumin kills tumor cells and protects normal cells. According to a study by the NIH, curcumin selects cancer cells specifically for destruction.

Studies show that because curcumin inhibits proliferation pathways, it prevents metastasis or spreading of cancer. In other words, because curcumin blocks cancer's ability to proliferate, the cells cannot grow and spread throughout the body.

Inflammation can actually predispose a person to cancer according to Cancer Network. The anti-inflammatory actions of curcumin reduce or remove inflammation.

Curcumin's antioxidant actions protect DNA and cells from free radical damage, also known as oxidative damage. Free radicals are the leftovers from oxygen used in your body. They attack cells and can disrupt DNA from creating abnormal cells.

Specific instructions exist at Turmeric for Health on the amounts to take for cancer. Begin with 1 gram for a week. When no side effects develop, double this for week two gradually building up to 8 grams per day. Always check with your doctor before using any supplement protocol.

The term heart disease encompasses a variety of issues. Atherosclerosis, coronary artery disease, and arrhythmias all fall under this blanket term. Contributing factors include obesity, high cholesterol, diabetes, and high blood pressure. Curcumin protects the heart from oxidative damage, inflammation, blood clots, and cholesterol buildup and reduces the risk of myocardial infarction in people that have had bypass surgery.

A study in the Journal of Nutritional Biochemistry found curcumin is able to change the structure of body fat. It turns fat from white stored fat to brown calorie burning fat, which can help reduce obesity, a major risk factor for heart disease.

Turmeric for Health suggests a dose of 400 to 600mg three times daily but also states the amount varies by individual. You can also use the spice. Check the recommended dose on the bottle for specific dosage of the supplement you are using. Do not take curcumin if you are on blood thinners, because it may interact. There is a risk of excessive bleeding or bruising when combining these two substances.

A study in Molecular Nutrition & Food Research states, "results suggest that curcumin seemed to be a potential glucose-lowering agent." Incidence of type 2 diabetes is on the rise. High fat diet, sedentary lifestyle, and obesity are all contributing factors to this epidemic.

According to an article in Diabetes Care, a nine month study on patients with a prediabetic condition showed curcumin lowered the number of people that went from prediabetes to type 2 diabetes. Curcumin regulates blood glucose levels and can even decrease them, assisting with management of diabetes.

The University of Maryland Medical Center has specific adult dosages. These dosages are not disease specific. Please remember to consult your doctor prior to taking supplements.

Itching, swelling, pain, and inflammation are some of the common symptoms of vaginitis. Causes include an overgrowth of bacteria, yeast infection, or sexual transmission.

Curcumin's anti-inflammatory action can reduce the pain and itching inflammation causes. Curcumin is antibacterial, antifungal, and antiviral. All of these actions allow it to be beneficial in cases of vaginitis. It's antiviral action has even been shown to be beneficial in HIV.

Curcumin can be taken orally according to the dosages from the University of Maryland Medical Center shown above. Several gels and creams are in development for topical treatment.

You should always consult your doctor or other healthcare professional prior to taking supplements. This is extremely important if you are already taking medications for a health problem. There are no cautions for turmeric in culinary amounts. Medicinal doses have the following cautions.

Dietary amounts of curcumin are not enough to give you results against specific illnesses. Supplements need to be taken. Make sure you check with your health care professional prior to including supplements. Curcumin's bioavailability is low without taking something to boost it. Black pepper and quercitin can both increase its bioavailability.

Curcumin has been used to treat illness for thousands of years. Modern findings show curcumin has benefits in many diseases and health conditions. The beneficial results against major diseases allow more research to be done. It will be exciting to discover what else curcumin can do.