The yarrow plant (achillea millefolium or achillea lanulosa) was used in ancient times to stop bleeding.

The yarrow plant gained the nickname "nosebleed plant" because a number of people used the leaves to stop nosebleeds. Besides its blood clotting property, the yarrow has numerous beneficial uses. The beautiful thing about the yarrow plant is that you can use all of the plant: the flowers, stems, leaves, and even the roots.

Yarrow as an herb is astringent and, while mildly aromatic, can also be used as a tonic or stimulant. It's classified as a healing herb because of its blood-clotting properties.

This drought resistant plant is found in its natural environment of grasslands and forest meadows in North American, European and Asian regions of the world. Yarrow plants need a well drained, somewhat dry ground and sunny place in order to thrive.

The yarrow plant comes in several varieties with purple, yellow, pink, or white flowers. Blooms are round or oval in shape with a flattened appearance and grow in large clusters. Leaves are lacy and often referred to as appearing feathery. The yarrow plant matures to around 20 inches in height. In healthy plants, the foliage is a deep green color.

According to Greek mythology, Achilles was advised to carry yarrow with him into battle. He used it on himself and his army to stop the bleeding of the wounds received in battle. This may be why the plant is also known as Soldier's Woundwort. The name achillea (achillea millefolium or achillea lanulosa) is a derivative of the word, Achilles.

Other Names for Yarrow

Out of all of the herbs, yarrow seems to have the most alternate names.

Only a few of the other names for yarrow: 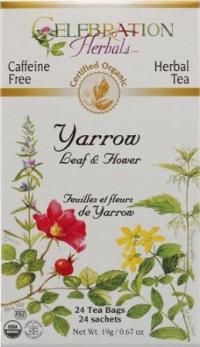 Because yarrow is a natural astringent, it can be used in various ways to relieve hemorrhoids and headaches. It can be taken internally and externally. The most cherished part of the plant is the flower. Some people use this part of the plant in the form of a snuff to assist in sinus and respiratory health. Other uses include:

Native Americans used yarrow to stop wound bleeding. They chewed on the purple part of the root to numb toothaches and to ease stomachaches. The leaves were often boiled until the pot created a steam, which they would inhale for various respiratory ailments.

Yarrow is great for detoxifying and cleansing the blood, especially when used in combination with other herbs. Yarrow plants are said to stop hemorrhaging in the lungs and can even help regulate blood sugar. The unique yarrow properties aid, and in some instances boost, the potency of other herbs when used in various combinations.

Many believe that the reason the yarrow plant is so beneficial in treating such a wide range of ailments is because it contains the acid, salicylic, which is also found in aspirin.

Other Uses of Yarrow

In addition to its medicinal value, yarrow was also used in the Middle Ages as an herbal concoction to flavor the grog (beer). The use of yarrow flavoring predates the discovery of using hops, which is the most common modern way to flavor ale.

Yarrow as a Food

In the 1600s, yarrow was often used as a food source. Teas were made from the plant and the leaves were harvested to be cooked and eaten much like spinach. Yarrow soups had a very sweet yet tangy taste. As an herb, the leaves were dried and stored for cooking and medicinal purposes.

As if everything mentioned so far isn't enough to make you rush out to get enough yarrow to stock your medicine cabinet, then knowing that it is also an excellent insect repellent should.

Yarrow plants have long been used as natural dyes. You can use the whole plant or opt for just the flower head. You'll get various hues of yellow, green and tan from this amazing plant, depending on which part you use for dyeing.

The Chinese have used the yarrow stalks for over 4,000 years in a form of divination for I-Ching. It requires 50 stalks and the precise performance of the divination ritual of selecting and placing the stalks in a certain order and pattern.

Growing Yarrow in Your Vegetable Garden

Yarrow is a great addition to your vegetable garden. Butterflies love yarrow. It repels insects, especially mosquitoes, so plant plenty of it around your patios and other outdoor areas you use frequently. Yarrow also repels rabbits and deer. These last two properties along with yarrow being rich in minerals make it a great companion plant for vegetable gardening and other crop applications such as pasture grasses.