Any side effects associated with burdock root are minimal. In fact, this plant has so many uses, including culinary uses, that it's generally considered safe for most people. Unless you're allergic to burdock's cousins, daisies and chrysanthemums, or you take specific medications or have an underlying medical condition, you will likely find that any side effects from burdock are mild or non-existent.

Most Common Side Effects

Burdock root is an intriguing plant. It offers many medicinal benefits, and is generally safe to use. However, any herb or natural remedy may cause side effects and/or drug interactions. As always, tell your doctor about any herbal supplements you're taking, and consult your healthcare practitioner with any questions you may have about this or any other herb.

The most notable side effect is an allergic reaction, especially among people prone to daisy, chrysanthemum and similar plant allergies. If you are allergic to any plants in the Asteraceae family, do not take burdock root, and do not eat or drink products containing burdock root.

According to University of Michigan Health, burdock root contains a naturally occurring fiber called inulin. This substance is commonly found in fruits, vegetables, and plants and is usually consumed without negative side effects. However, people allergic to inulin should avoid burdock root in order to prevent the likelihood of a rare yet serious allergic reaction. 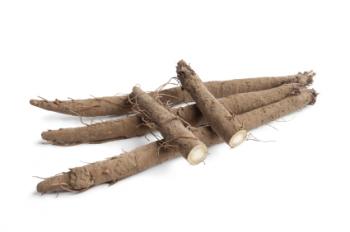 UMM also cautions that pregnant and nursing women should not take burdock root because it may cause damage to a developing fetus. Studies are needed to determine the effects of the root upon the developing fetus or growing child.

Burdock root may increase the risk of bleeding during surgery and slow blood clotting, according to WebMD. As a result, you should not use burdock root for at least two weeks prior to surgery or take it with anti-coagulant drugs such as aspirin, ibuprofen, Coumadin, Warfarin, Plavix, Heparin, or Naproxen.

A medical journal article abstract shared on SciAlert indicates that some research shows burdock root alters blood sugar levels. Although more studies are needed to prove this theory, they advise caution if you are diabetic and/or taking medication or supplements that affect blood sugar levels.

Although rare, there are reports of burdock root tea poisoning resulting in symptoms such as blurred vision, seizures, hallucinations, headache, fever, and disorientation. These poisonings occurred when the tea was contaminated with plants containing atropine, such as belladonna. Burdock roots closely resemble belladonna and nightshade. Both are poisonous plants so it's critical to purchase burdock root from a reliable source.

Although you may find people who love to harvest burdock roots in the wild, this is best left to professional herbalists. Rather than make a dangerous mistake, purchase burdock root preparations at a health food store from recognized and trusted brand names. By understanding the potential side effects of this nutrient-packed plant and consulting with your doctor prior to use, you can safely enjoy its many benefits.