Cooking with herbs is a great way to add flavor to chicken without adding salt or fat. Chicken's mild taste makes it the perfect complement to many herbs. Whether you prefer your chicken grilled, broiled or baked, there is an herb available that will punch up its flavor.

There are several herbs that go well with chicken. Fresh herbs have the strongest flavor but dried may be used as well.

Parsley has a mild flavor and slightly crunchy texture. It's delicious in comforting chicken soup or hot or cold chicken salads, or added to dumplings or biscuits that accompany chicken and dumplings or chicken stew.

Parsley makes a vibrant, edible garnish that helps support digestion when eaten after a meal.

Cilantro, also known as coriander, is best known for adding zest to Mexican and Middle Eastern cuisine. It's delicious in chicken tacos, chicken nachos, or chicken tortilla soup. It can be used in sweet or savory chutneys to top baked or grilled chicken or in a marinade or vinaigrette.

Tarragon is a pungent herb and a little bit goes a long way. French tarragon is the type usually used in cooking and if you're not careful, it will quickly overpower your food.

Fresh tarragon is often included in a sauce that is poured over baked chicken. You can also stuff the cavity of a whole chicken with fresh tarragon sprigs before roasting.

Tarragon is also used in many crockpot recipes. Try this healthy recipe for Chicken with Mushrooms and Tarragon.

Rosemary has a woody scent and strong taste. Like tarragon, it can also easily overpower your food if too much is used. In fact, tarragon and rosemary are often substituted for one another in recipes.

You can flavor chicken breasts in a rosemary marinade before cooking or place sprigs inside a whole chicken before cooking. Rosemary also makes a pretty garnish on your plate. Although you can eat the garnish without harm, most people do not because the flavor is too strong.

Sage comes in many varieties, but common sage is usually used in cooking. Sage has a very strong odor and taste which is enhanced as it dries. Sage is often found in stuffing recipes which are inserted into the cavity of a chicken or stuffed into chicken breasts before baking. Fresh or dried sage leaves can also be placed on top of chicken and baked, or be used as a dry rub or in a marinade.

Thyme is often used in chicken recipes prepared in a slow cooker. It also shines in chicken casseroles or pot pies. Like many other herbs that go well with chicken, thyme has a strong flavor that can overpower other ingredients. It's often a featured herb in chicken gumbo or other Cajun recipes. 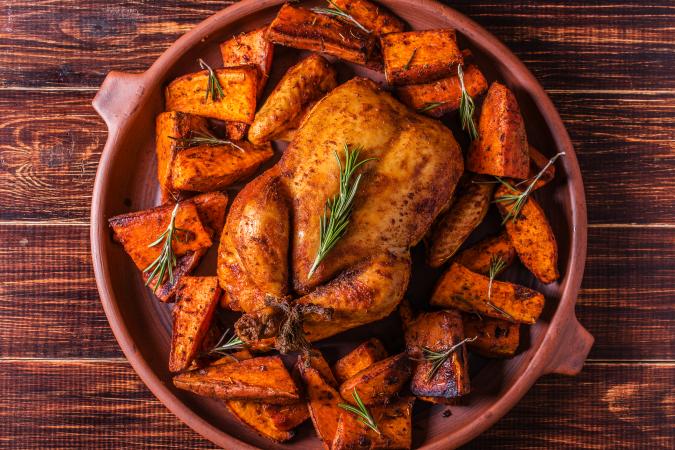 Herbs de Provence is a dried herbal blend used to season chicken (whole or pieces) and vegetables before roasting. The blend typically includes savory, rosemary, thyme, fennel, marjoram, and lavender. You can create your own Herbs de Provence or purchase it at most grocery stores.

An herbal rub is a mixture of dried herbs and spices that is pressed onto chicken or underneath its skin to add intense flavor. Dry rubs are especially good for grilling chicken. You can use Herbs de Provence as a dry rub or try one of Recipe.com's favorite dry rub recipes from Eating Well which include a coffee rub, an Indian herbal rub, a Cajun rub, and a Tuscan Italian rub.

Poultry seasoning blends can also be used as a dry rub for chicken or sprinkled on before cooking.

According to Reader's Digest Complete Illustrated Book of Herbs, "jerking" food is the "process of spicing and grilling meats." Jamaica is known for its jerk seasoning, a sweet and spicy rub that perfectly complements chicken. The rub can be used dry or wet.

There are likely as many ways to use herbs in your cooking as there are recipes for chicken. If you typically use the same herbs to season your poultry, be creative and try something new.

Chef Leslie Bilderbeck, author of The Complete Idiot's Guide to Spices and Herbs, says in an interview with LoveToKnow that "you should taste your herbs raw and try to imagine what will go with it." She also recommends visiting ethnic food markets and choosing herbs you're unfamiliar with. Because chicken is such a versatile meat, you're sure to find many ways to add herbs to your chicken recipes.