Chamomile is one of the most recognizable and popular herbs available. It's best known as a soothing tea, but chamomile essential oil has impressive benefits too. The oil is extracted by steam distillation from fresh or dried chamomile flowers. There are many ways to harness its health and aromatherapy benefits.

This oil is used to flavor teas, mouthwashes, and other foods. It's also found in soaps, cosmetics, and other personal care products. Chamomile is a popular aromatherapy and alternative remedy for many health concerns and conditions. 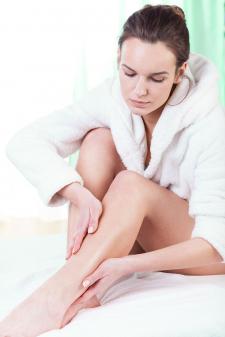 According to a review published in Molecular Medicine Reports, chamomile oil has anti-inflammatory abilities. It contains flavonoids with the ability to penetrate deeply below the skin's surface. Research shows chamomile may help relieve eczema and diaper rash. It may also help heal wounds.

The oil may help new moms who've had an episiotomy heal faster. According to a 2004 Korean study, using essential oils such as chamomile in an aromatherapy sitz bath or aromatherapy soap help heal the perineum after birth. A douche made of chamomile essential oil may relieve vaginitis symptoms associated with vaginal dryness.

Some research suggests steam-inhaling chamomile oil may relieve cold symptoms, such as congestion and cough.

A sitz bath containing the oil may reduce inflammation and bleeding associated with hemorrhoids. The flavonoids in the oil may help control bleeding in acute, internal hemorrhoids, according to a study published in the British Journal of Surgery.

Oral mucositis is a potentially debilitating side effect of cancer treatment. It may cause symptoms like swollen gums, mouth sores, mouth bleeding, pain, and difficulty talking and eating. Research shows chamomile essential oil mouthwash made of 30 drops of the oil to 20 ml water may help prevent oral mucositis during chemotherapy.

According to a 2005 study, chamomile extract mouthwash significantly reduced plaque build-up and gingivitis compared to a control mouthwash. Participants experienced no adverse side effects.

Chamomile is found throughout the world. It can be grown almost anywhere there's full sun and good soil. There are two main types of the oil, also called chamomile extract: German chamomile (Matricaria chamomile) oil and Roman chamomile (Chamaemelum nobile) oil. The oils are different in scent and chemical composition but are often used interchangeably. German chamomile oil is the more popular of the two. Both are herbal remedy powerhouses.

German chamomile oil, also called blue chamomile oil, has a sweet, herbal aroma and a rich, blue color. It gets its blue color from its high azulene content. Azulene is an organic compound formed during steam distillation.

How to Use the Oil

There are several ways to use the oil:

Do not ingest chamomile essential oil unless under the advice of a trained herbal practitioner.

All types of chamomile are members of the daisy family (Asteraceae). If you're allergic to daisies, ragweed, sunflowers, asters, chrysanthemums, or any other flower in the daisy family, do not use chamomile.

Chamomile may interact with:

Inhaling chamomile essential oil or applying it to your skin may not increase your risk of drug interactions in the same way ingesting chamomile would. Still, it's still best to err on the side of caution.

Chamomile is known for being a calming, soothing herb. Research on its effectiveness to treat many conditions is promising although researchers need to investigate more before it becomes mainstream. Thanks to its sedative, anti-inflammatory, antimicrobial, and antioxidant abilities, chamomile oil deserves a place in almost any home medicine cabinet.